In 1913 Mondrian began his intensive investigation of the architecture of Paris. The streets, and especially individual buildings, of the French capital fascinated him: in them, he saw an environment already ordered by the human spirit. He made numerous drawings of façades and roofs. Of particular interest is a view that Mondrian probably sketched from the window of his studio in rue du Départ, showing a partly demolished house. The open wall reveals not only the inner structure of the building and the division of floors, but also the wallpaper and the painting of the interior walls. This sketch forms the basis for Composition No. VI and other oil paintings until 1915.

In Composition No. VI Piet Mondrian is more interested in the structural characteristics and colors of the house as sources of inspiration than in its figurative representation.The final composition is the result of a gradual process of artistic discovery, typical of Mondrian’s work, in which the positioning of the lines and the assignment of colors continually vary. He orders the picture as a strict geometric scheme, dominated by vertical and horizonal lines. This already anticipates the composition of Mondrian’s later paintings. The lines provide the rhythmic structuring of the strictly flat composition. Despite the emphasis on planarity, however, a sense of foreground and background is provided by the choice of light colors, the transparent brushwork, and the fact that large areas of the primed canvas remain visible.

Images of the painting

To read and understand a painting and its current condition, it is important to know both its conservation history and its provenance. Without this knowledge it is difficult to explain certain appearances of the paint or to make treatment decisions that may be necessary or possible in the future. Relevant information for this is provided by historic photographs, documentation, correspondence, and physical traces on the work. The following section sets out the dramatic conservation history of Composition No. VI.

In the 1950s, when Composition No. VI arrived with its former owner in the US, the painting was probably in a relatively authentic state. Whether it suffered damage in transit is not known. The critical conservation treatment whose impact is still apparent today date from the 1970s.

Two black-and-white photos from 1971, taken in the MOMA’s conservation department before the interventions, are especially valuable documents for the painting’s conservation history. Seen under the microscope, the photo of the front reveals pin holes from temporary stretching of the canvas and lines of underdrawing that today are no longer visible. The image of the verso of the painting also shows the original canvas margin, which was trimmed after the conservation in 1972. This bore the first title, Composition No. VI, with further labels that are relevant for provenance research.

The two photographs also show conservators how the canvas was primed at the time when the work was painted: the ground layer extended right across the surface to the edges. This means that the canvas was already primed before being stretched, and was cut from a larger piece of fabric. The pin holes in the corners of the painting indicate that the canvas was temporarily stretched before being attached to the stretcher. This matches contemporary witnesses of Mondrian’s occasional practice of attaching the canvas on a table and painting on the horizontal surface.

The irreversible conservation treatment of 1972

The most significant intervention occurred in 1972, as documented in conservation files. The painting was apparently removed from the original stretcher and re-enforced by attaching it with wax and heat to a second support (a practice known as “lining”), before subjecting it to invasive cleaning and applying a fresh acrylic resin varnish. These treatments flattened the surface structure of the paint, obliterated original lines of the underdrawing and partly thinned out the white ground layer of the background.

Detail of the black-and-white photo from 1971 compared with an image from today, showing that the charcoal lines originally ran on further.

After acquiring the painting in 1989, Ernst Beyeler had these treatments reversed as far as possible, in accordance with the artist’s original intention. For example, the lining was removed to make the signature painted by Mondrian on the reverse of the canvas visible again. Correspondence shows that reconstruction of the original frame was also considered and attempted. Some of the pin holes were filled and retouched in 1997, but after this, only minimal preventive treatments were taken with a view to ensuring the work’s preservation. 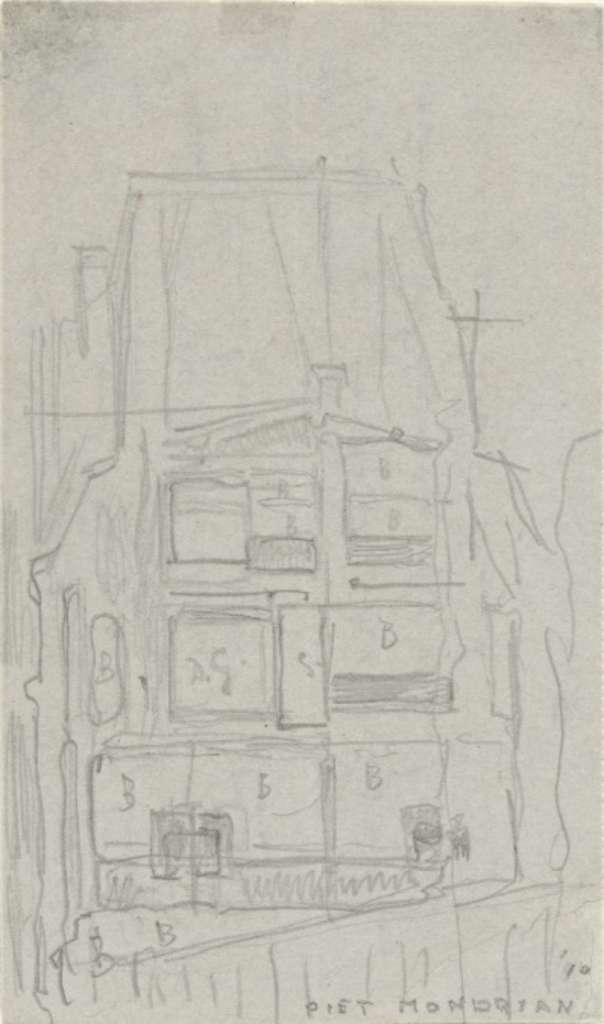 Black-and-white photographs from 1971, taken at the MOMA before the restoration in 1972, mapping of the tack holes visible under the microscope, followed by the photos of the status in 1990, before removal of the doubling on the sheet visible from the rear, recto and verso as seen today

This treatment involves attaching a second support (generally a canvas) with glue or a wax-resin mixture to the reverse of the original support. The glue, applied using heat, can permeate into the original textile and through to the picture surface, leading to changes in gloss and compression of the paint layer. If the second support is subsequently removed, traces of the glue remain within the paint layer. The original state of the work is permanently altered. Today, this type of intervention is avoided, since it cannot be carried out without irreversible changes to the painting and the textile support.

From sketch to finished painting

The sketch as an integral element of Mondrian’s oeuvre

The importance of the sketch for Mondrian’s working process is described by Robert Welsh in his essay of 1980, “Mondrian as Draftsman.” Between 1913 and 1915, the artist made a particularly large number of sketches and studies in order to acquaint himself with the Cubist approach to paint. In later years, too, periods of stylistic change are accompanied by an increased production of sketches. This shows that Mondrian resorted to the sketch when trying to solve problems of composition. Mondrian’s painting also shows evidence of his familiarity with the use of drawing instruments. Initially, he fills the planes with hatching, as in his sketches, and uses charcoal and strips of paper to experiment with changes of composition on the canvas.

Starting from the sketch of a building in Paris, Mondrian drew the abstracted structure of black lines for Composition No. VI with charcoal on the canvas. These grainy lines of charcoal are still partly visible along the painted lines.

Mondrian then traced over the lines of the sketch with thin black paint, possibly with the help of a ruler, and began to fill the planes with color. His quick and spontaneous manner of working is clearly illustrated by the brushstrokes in the X-ray image. The brushwork recalls the hatching often found in his sketches. The planes were executed very rapidly, applying the colors wet in wet and causing them to mix together in places on the canvas. Mondrian already indicated the choice of colors in the sketch, with areas marked “B” for blue or “G” for gray.

The artist as his own worst critic

It is possible that Mondrian was not yet satisfied with the painting, which he reworked either between the exhibitions in 1914 and 1914 or shortly afterwards. How do we know this? The revision is apparent from the compositional changes in the black lines. The X-ray shows all the areas containing black lines as dark, since they were painted with non-metallic pigment (bone black), plus a small amount of lead white. In contrast, the colors for the blue, gray and beige planes contained a high proportion of lead white, so that these areas show up white in the X-ray image. The black lines added subsequently are barely visible in the X-ray, since they run over the paint layer containing more lead white.

On the one hand, the additional black lines were applied over dried color, with the result that their contours are clear. On the other, the planes too were partly overpainted, and further lines were drawn over them, blending with the color and producing fluid transitions.

As well as adding black lines, Mondrian overpainted some of the existing lines. This way of working shows that painting, too, is a step-by-step process of approximation, providing a demonstration of how Mondrian gradually develops his composition and completes the picture. The same process can be observed in other works from this period, including Eucalyptus from 1912. It also becomes apparent why Composition No. VI was submitted as a “study” for the exhibition in 1914. 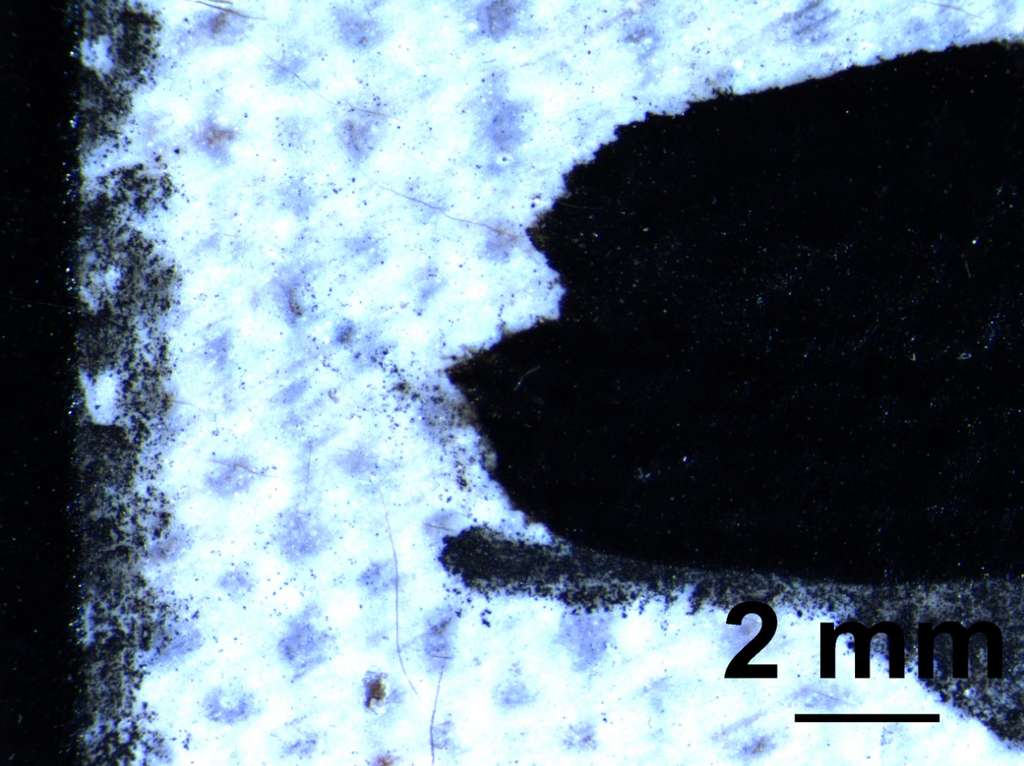 X-ray with and without lines supplemented by Mondrian 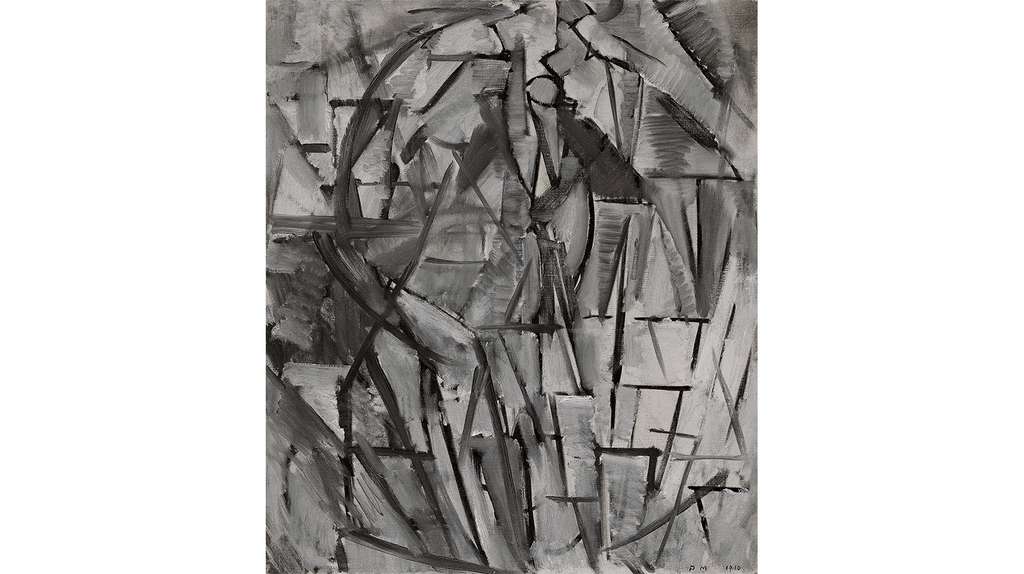 Eucalyptus provides a striking demonstration of Mondrian’s experiments with stylistic elements of Cubism in the treatment of composition and color. 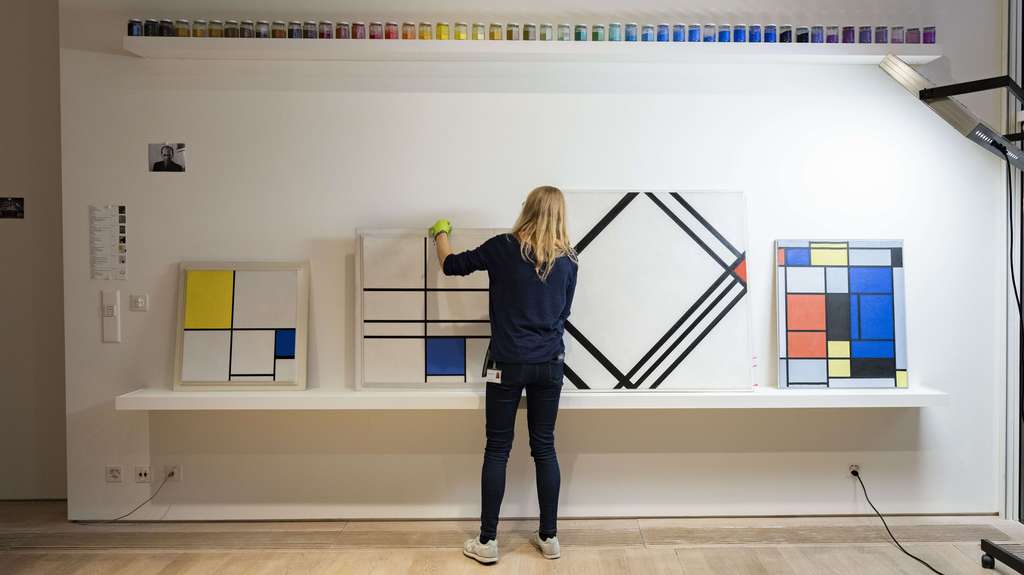 Get an overview of the Piet Mondrian Conservation Project and the seven works being examined. 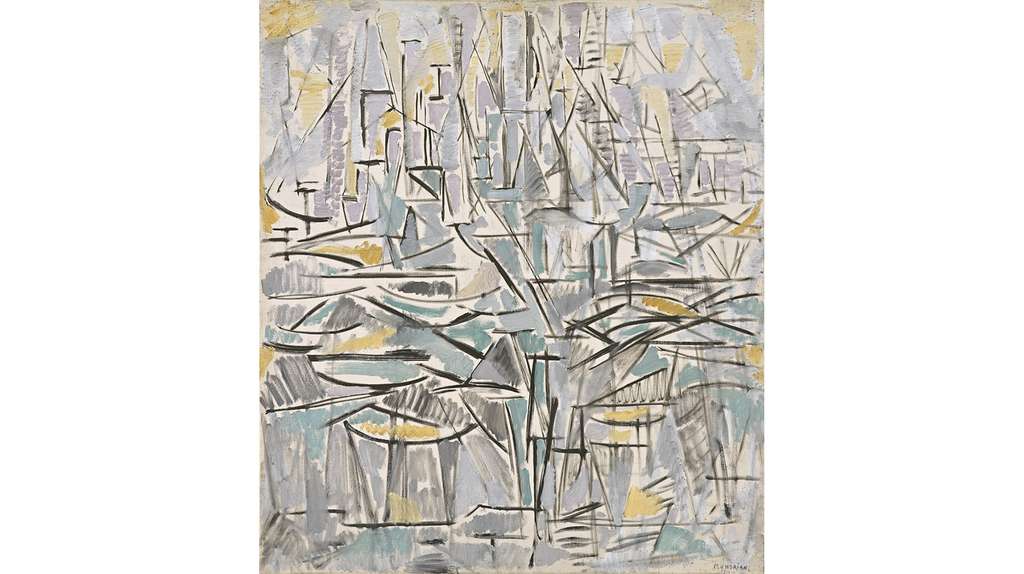 Despite the geometric structure of Composition No. XVI, the generally fine lines and sketch-like application of color make the picture light and transparent.