A century full of memories

A century ago, on 16 July 1921, the founder of the Fondation Beyeler was born. As one of the leading gallery owners of his time, he and his wife Hildy built one of the world's most important modern art collections. This collection has been housed in the Fondation Beyeler since 1997, which was designed by the Italian architect Renzo Piano. As a co-founder of Art Basel, Ernst Beyeler made a significant contribution to the international reputation of Basel as a city of culture.

If his life were a fairy tail, it would beginn like this: Once upon a time there was an antiquitarian bookshop in Basel called "Librairie du Château d’Art". It belonged to a man called Oskar Schloss and Ernst Beyeler worked there as a student apprentice. When the former suddenly passed away in the year 1945, the 24-year old Ernst took over the space in the Bäumleingasse 9. Soon Ernst came up with the idea that he could also sell art in his newly acquired shop and so, in 1947, he covered the book cases with sheets and presented his first exhibition which was compiled of Japanese wood prints. By 1950, all the books had disappeared from the shelves and the antiquitarian bookshop was transformed into a gallery that presented works by Picasso, Bonnard, Degas, Renoir and Matisse. What followed was indeed fairytale-like: Ernst's gallery became world-famous, and he himself became one of the most successful art dealers of his time. A foundation was set up and finally the Fondation Beyeler was built to make art accessible to a broad public.

Let us introduce you to Ernst Beyeler in more detail:

Hildy Beyeler’s birthday is on July 14 and Ernst Beyeler’s on the 16. This was very useful because they could always celebrate together, And in the same way:

Firstly, on the July 15, the pair would invite their gallery team to lunch. Everyone would examine and praise the garden, play a round of boccia and enjoy a three course meal together.

Shortly afterwards, a glance at the clock would signify that it was time to get back to work.

Every year on July 16, they would throw a lavish garden party for their closest friends.

On the occasion of his 100th birthday, we commemorate Ernst Beyeler with personal anecdotes from his life.

His fondness for trees

In the year 2000, the actor and Oscar Awards winner Peter Ustinov gave Ernst Beyeler a mamoth tree. This was a very fitting gift because trees played an important role in Beyeler’s life.

In 1938, the 17 year old Ernst Beyeler took part in protests against the felling of an old lime tree in the Basler Bäumleingasse. On this occasion he also got to know the 16 year old Hildy Kunz, who would later be known as Hildy Beyeler.

Worldwide attention was sparked in 1998 when the artist couple Christo and Jeanne-Claude wrapped the deciduous trees in the park of the Fondation Beyeler in a light grey fabric.

Ernst Beyeler even planted trees himself - illegally: His plan was to obscure two houses that ruined his view of the nearby Tüllinger Hills.

And he also protected trees; not only in the Bäumleingasse in Basel but also with the Stiftung Kunst für den Tropenwald (Art for Tropical Forests) founded in 2002.

To mark his 100 birthday, a new tree will be planted in Berower Park: a Ginkgo tree near the sculpture "The Tree" by Alexander Calder.

Ernst Beyeler was an avid cyclist - even in unexpected places.

A photo shows him riding through the halls of Art Basel. Small wheels, high saddle, checkered shirt: there' no doubt about it - he couldn't be missed.

Another bicycle photo shows him 1998 in Berlin, where his collection was shown in the Nationalgalerie. This time his ride was a lady’s bicycle equipped with a basket.

Ernst Beyeler often cycled from his home to the Fondation Beyeler in the afternoon. The location in the immediate vicinity of nature is still a paradise for bicycle excursions today.

In 1945, 24 year old Ernst Beyeler bought the antiquarian store "Librairie du Château d’Art" in the Bäumleingasse 9 in Basel – and used it as his gallery.

The gallery was very small, which added to its charm. Thankfully enough it was possible to remove the staircase railing in order to transport large-scaled Rothko paintings in and out of the building.

The majority of the artworks were stored in a room situated in the Luftgässlein, a few paces from the gallery. This stash filled with piles of art was a much more than just a storage area: It was paradise for art lovers.

The Beyelers lived in Riehen, in a small historic house. The garden, however, was enormous.

Several times a year, the Beyelers travelled to the Greek island of Ios, where they owned a simple house - which had simply been added to their possesion as part of an art deal.

The roof, the stone, the pillars: Beyeler immersed himself so profoundly in the details of the museum's construction that he could almost be called Renzo Piano's co-architect.

Shortly after the opening of the museum in 1997, it was expanded again due to its popularity. By now, almost eight million visitors have entered the building.

Ernst Beyeler was a great fan of Alberto Giacometti’s sculptures - but not only as artworks! Apparently he used Giacometti’s "Femme de Venise" as a doorstopper in the gallery.

"I offer you what no one has ever been allowed to do before," said Picasso to his visitor in Mougins: "I let you choose them yourself." Ernst Beyeler chose 45 paintings. In the end he received 26 of them.

In 1960 American painter Mark Tobey came to Basel – and promptly fell in love with the city. Beyeler organised a house for him in St. Alban-Vorstadt and Tobey lived there untill his death in 1976.

Ernst Beyeler once recounted his visits to New York: "I had to accompany Newman to bars, where we also met de Kooning and other friends; the fine and unforgettable fish restaurant Sweets in downtown Manhattan was as much a part of it as a visit to a boxing match."

What you've always wanted to know about Ernst Beyeler...

How is "Beyeler" correctly pronounced?

This is actually a popular search question.The name comes from the Berner Swiss German word [Bī(j)eler] and means beekeper.

Yes, he made aquarell paintings. However, he never understood himself as an artist. Under the pseudonym "Ernst Paul" (his second name) he once exhibited a work.

In 1980, Ernst Beyeler a sculpture exhibition under the title "Sculpture in the 20th Century" in Wenkenpark in Riehen. With 148 works from artists such as Auguste Rodin and Richard Serra the exhibition attracted international attention. Unfortunately, Beyeler had overspent the budget of the highly acclaimed exhibition so much that he was subsequently thrown out of the Riehen Art Commission.

Who were the must interesting clients?

A particularly interesting customer of Ernst Beyeler's was an ironer from Winterthur who had inherited a small fortune and wanted to invest in art. She bought "Baigneuses" by Cézanne, a work by Gaugin and "Improvisation 10" by Kandinsky. Only a few years later she returned, severely in debt, and asked Beyeler to take the works back. He bought back all three paintings at double the price, and then decided not to offer the works for sale and even hung "Improvisation 10" in his living room.

I had the advantage of living in Basel - far away from the Parisian or New York rumours that can sometimes make or break a certain reputation out of emotion or out of the blue, and far away from artists themselves or artists' families.

Trading and making money: all well and good, but really only in order to be able to buy something different and better with the money and to pursue a new exhibition idea.

The most exciting thing for me is hanging the pictures: placing different kinds of pictures in such a way that for a certain period of time, in the exhibition, they constitute a kind of total artwork.

Find out more about Ernst Beyeler

"Ernst Beyeler. A Passion for Art"
A life with and for art

Between November 2002 and February 2003, Christophe Mory conducted a series of recorded interviews with Ernst Beyeler. These conversations subsequently became the basis of this book. The result is a fascinating biography addressed at a wide readership, one that brings us much closer to the glittering figure of Ernst Beyeler. 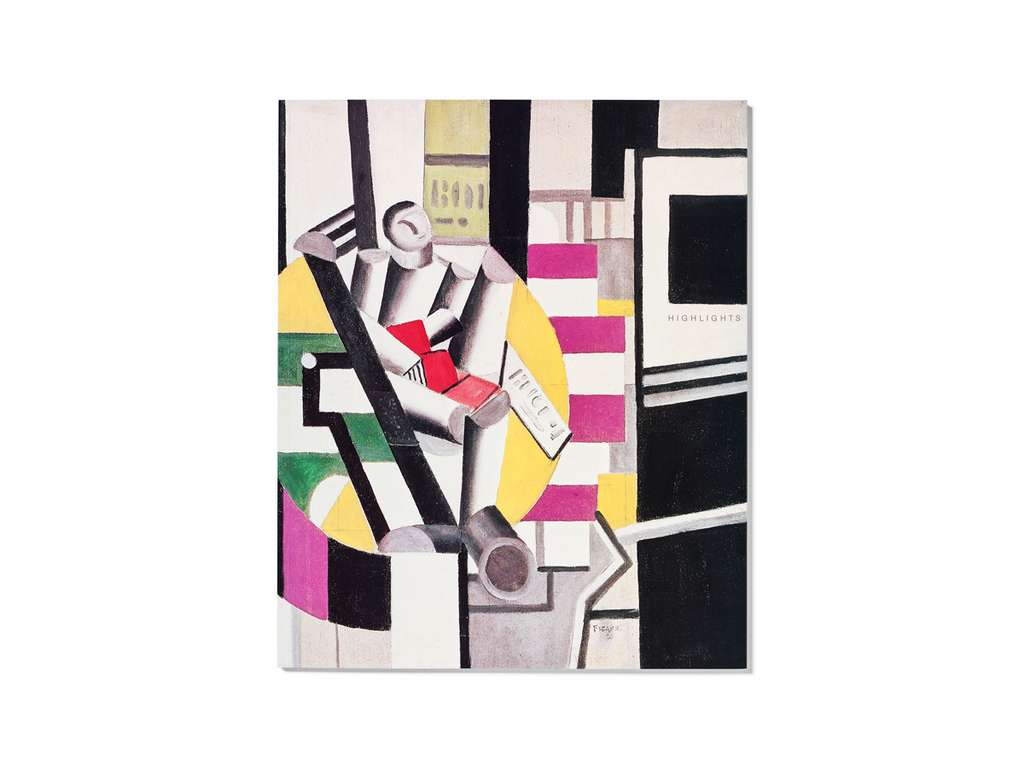 Ernst Beyeler never lost his love of fine books. In line with the Beyelers’ high standards when it came to art, each exhibition at the Galerie Beyeler was accompanied by a high-quality, carefully designed and prepared catalogue. A few copies of some of these original catalogues still survive and are available to purchase.

"Renzo Piano. Fondation Beyeler"
From drawing board to art space

In his essay, Renzo Piano gives us a very personal account of the design process and reveals how closely Ernst Beyeler was involved in the planning. Piano takes us all the way through the building of the museum, from initial ideas and sketches, through the practical challenges of construction, to the inauguration of the Fondation Beyeler.