Le lion, ayant faim, se jette sur l’antilope (1898-1905) is one of the highlights of the Beyeler collection and one of the largest, most important works painted by Henri Rousseau. The conservation of the painting was completed in little over a year. The goal was to optimize the work aesthetically. To that end, the soiled surface had to be cleaned with dry synthetic sponges. The research project led to surprising revelations about Rousseau's painting materials and to overpainting that might have been executed by the painter himself.

Henri Rousseau (1844–1910) was one of the most unconventional artists of the late 19th century. Being an autodidact, he was not taken seriously by the academic art scene, critics, or by the public at first. Only in the 20th century did he earn recognition for his work, especially in avant-garde circles. He made his breakthrough at the prestigious Salon d'Automne in Paris in 1905 with his large-format jungle painting Le lion, ayant faim, se jette sur l‘antilope, which today is one of the highlights of the Beyeler Collection.

Le lion, ayant faim has a very special place amongst Rousseau's work. Though it was likely finished in 1898 for the Salon des Indépendants, it was first given a place of honor at the 1905 Salon d'Automne. It is the first of Rousseau’s works to have found its way to the art market. This success may be the reason that Rousseau painted over twenty jungle paintings during the last years of his life. Rousseau was much admired by the avant-garde and his art prefigured later developments in painting in the 20th century. Artists like Pablo Picasso, Fernand Léger, Vasily Kandinsky, Joan Miró, and Max Ernst were profoundly influenced by his paintings.

Unlike the Impressionists and Post-Impressionists, Rousseau did not deconstruct pictorial motifs into shimmering dabs of color and light. Instead, he used clear lines and hard contours to capture them on the pictorial surface with unusual directness. Subtle chromatic and formal harmonies, as well as a tension between objectivity and mysterious fantasy, are characteristic of Rousseau's works, particularly his exotic jungle paintings. His works are carefully composed and full of power and poetry. 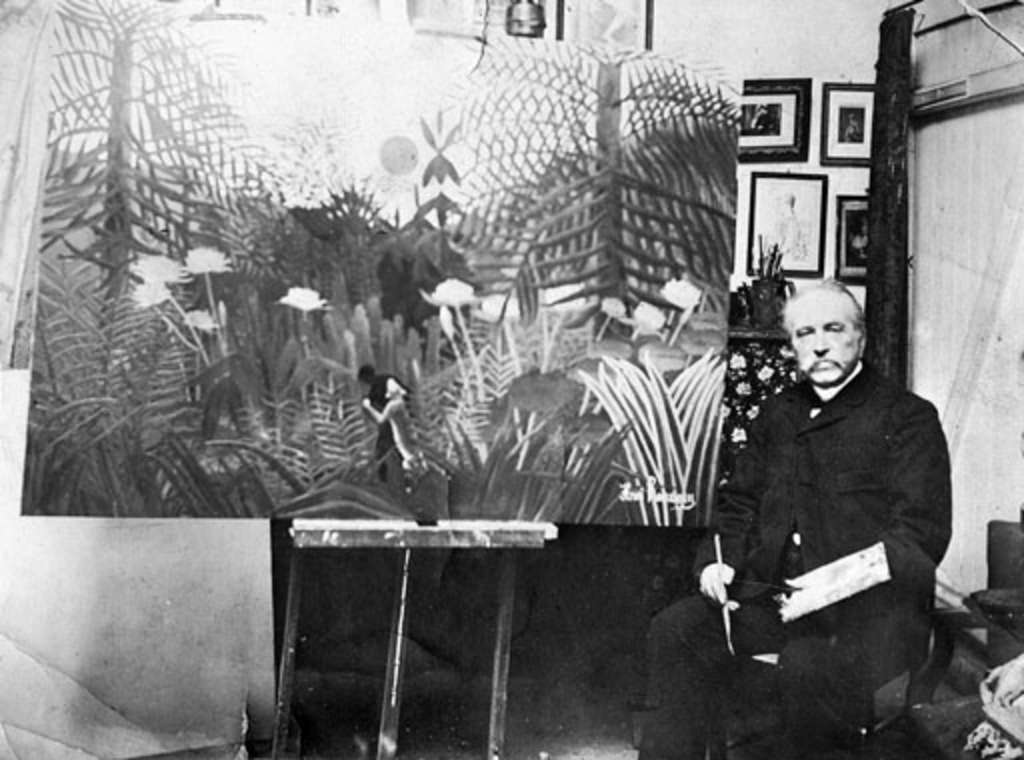 The earliest-known paintings by the Parisian customs agent date from 1877. In 1885, he quit his job at the customs bureau to devote himself entirely to painting. He began exhibiting at the Salon des Indépendants in 1886. He was a friend of the poet Alfred Jarry and knew Gauguin, Redon, Seurat, and Pissarro. In 1891 he began painting exotic, fantastical motifs. In 1906 he met Delaunay, Picasso and the circle of people surrounding Apollinaire. Picasso held a banquet in his honor the following year.

The paint layer of Le Lyon, ayant faim, se jette sur l’antilope is in very good condition, but visually somewhat compromised by an accumulation of dirt and minor damages which have occurred over time. Exhaustive research was necessary to develop a suitable conservation strategy. The project also aimed to reach conclusions about earlier overpainting, readily visible to viewers. It was uncertain whether these were from the artist or a later addition.

Overpainting by the artist

In order to determine the origin of the overpainting, historical photographs of the jungle painting were used for comparison. Scientific examination ultimately confirmed the similarities between the overpainting material and Rousseau's original paint layer in regard to date and composition. It was therefore concluded that these areas could have been added by the artist himself (figure 1). Although noticeable due to their color change, the overpainted areas were thus not removed.

Further examinations were able to answer important questions regarding Rousseau's painting method. The artist would first draw in the formal elements with a pencil, then paint the main composition with dark Prussian blue in oil before going on to the painting process.

A detail of the lower right corner of the painting shows obvious dark-green overpainting. These were not removed ...

The soiled but fragile paint layer had to be cleaned without using any solvents or water. Instead, conservators ...

The main goal of the conservation was the removal of a thin, grayish film of dirt, as well as whitish blanching that had developed locally on the surface. Tests showed, however, that common cleaning methods using aqueous solutions or solvents would harm the paint layer. A chemical analysis of the paint revealed why: Rousseau did not work with a pure oil medium but also mixed protein-based (tempera) media into his paint, which can remain soluble even after a hundred years. This is a completely new observation about Rousseau's painting methods and will be researched further after the conservation project is finished.

Through exhaustive testing, an alternative cleaning method was found using dry, synthetic latex sponges. These were gently wiped over on the painting’s surface (figure 2). The resulting “crumbs” of the sponge bound the superficial dirt within them (figure 3). As a result, the painting again showed its original depth and strength of color. The artist's application of paint is now visible in its finest nuances. In the last step, the many tiny losses in the paint layer — hardly visible to the visitor, yet so numerous that they disturbed the overall impression — were first filled, then retouched. This was carried out very conservatively, respecting the age of the work and preserving its history.

A comparison of the sponge crumbs used for cleaning — unused (left) and used on the paint layer (right) — show how much surface dirt could be removed and bound within the material of the sponge.
The soiled but delicate layer of paint had to be cleaned without using any solvents or moisture. Instead, conservators worked with special dry sponges. 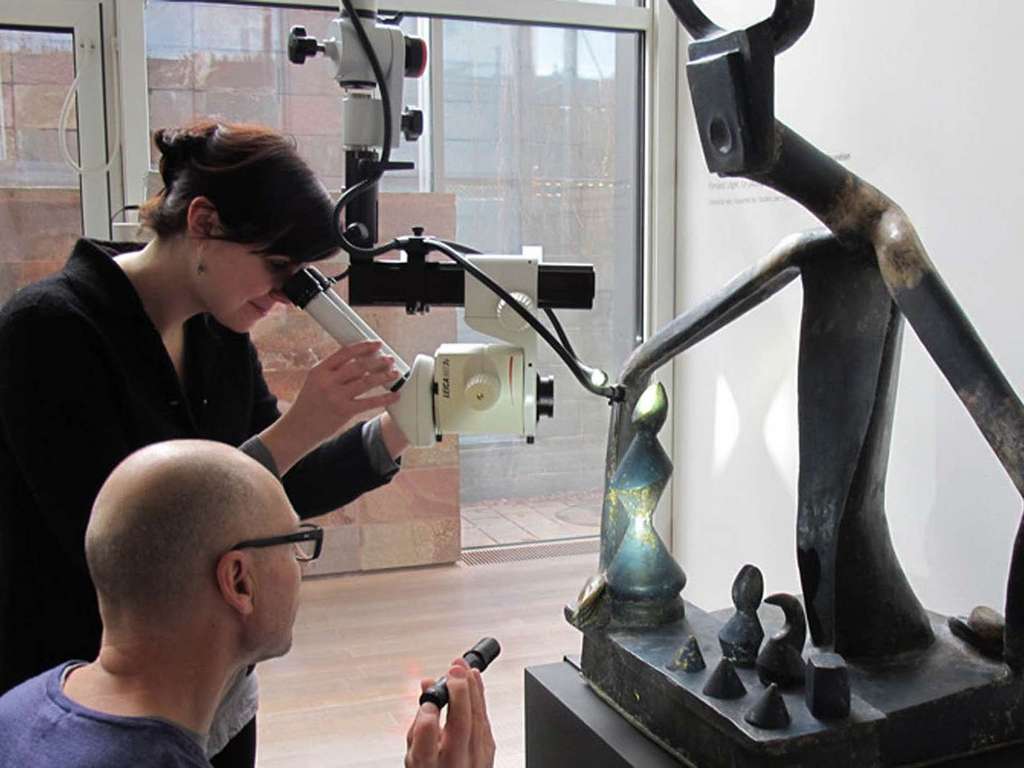 „THE KING PLAYING WITH THE QUEEN“ - MAx ERNST

The examinations conducted by the team of conservators provided important information about the sculpture’s construction and the interventions it was subject to over the years.

„LE PASSAGE À NIVEAU“ was thoroughly examined and restored as part of a restoration project funded by the Fondation BNP Paribas Suisse. Valuable knowledge about the materials, technique, and history was gained over the course of this project.