From his very beginnings in the late 1980s, Rudolf Stingel (*1956) has approached painting in a conceptual and self-reflexive manner, exploring its possibilities and media-specific limits through the interplay of artistic strategies, materials and shapes. Based on his confrontation with classic pictorial themes, he develops a wealth of motif variations. Alongside various series of abstract and photorealist paintings, he creates large-scale works made of Styrofoam or cast metal, as well as spaces covered in carpets or reflective silver insulation panels. Notwithstanding their material disparities, all these works share the random or deliberate painterly traces that appear on their surface.

Certain brand new paintings created only this year will be on view for the very first time. The show will also present new site-specific works using carpets and insulation panels in the museum’s exhibition.

The exhibition has been conceived in close collaboration between the artist and guest curator Udo Kittelmann, a long-standing expert of Rudolf Stingel’s work. 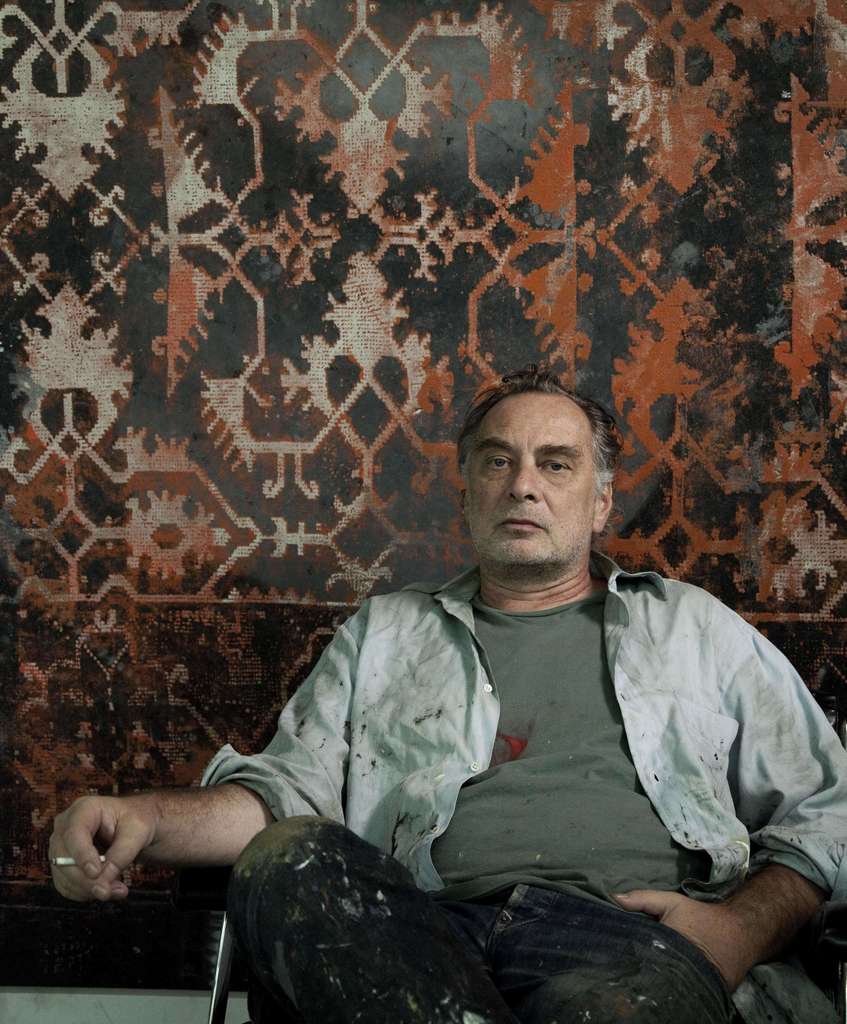 Born in 1956 in Merano, Italy, and based in New York since 1987, Rudolf Stingel is one of the most internationally-celebrated painters of his generation. From the onset, his way of working has been hallmarked by a substantive exploration of the medium of painting, and of the principles and forms of representation that constitute it.

He has exhibited internationally, with solo shows including those at Palazzo Grassi, Venice (2013); Secession, Vienna (2012); and LIVE at the Neue Nationalgalerie, Berlin (2010); and a major retrospective at the Museum of Contemporary Art, Chicago and the Whitney Museum of American Art, New York (2007). Other major solo shows include those at the Museum für Moderne Kunst, Frankfurt (2004) and the Museo d’Arte Moderna e Contemporanea, Trento, Italy (2001).

The artist spoke with Udo Kittelmann, guest curator, about his work in conjuction with his exhibition at the Fondation Beyeler.

The talk conducted in German with simultaneous translation into ENglisch and French.

The lecture as video

The subject of Untitled, 2019, is taken from Rudolf Stingel’s 1989 artist book titled Instructions. In this step-by-step photographic description, he explains in six languages how his abstract paintings are made. One of the last steps is the application of silver paint with an airbrush onto a canvas coated with oil paint and covered with tulle. Instructions provides readers with the techniques of how to make a Rudolf Stingel work; at the same time, it highlights the ambivalence between the original and the copy. Stingel’s photorealistic paintings are always the result of a rendering process. An existing image, in this case, a black and -white photograph that he himself commissioned, is transposed onto another medium, namely, a large-format painting. Here, the transformation is particularly evident: the airbrush, the painter’s tool, is painted, and the canvas visible in the Instructions’ photograph is enlarged and translated back into an actual canvas.

Poised in the center of the picture is a realistically painted red fox in a snowy landscape. The reference for the work is from an old German calendar in which each of the weekly pages shows a different animal in its natural surroundings. Untitled, 2013, with its precise brush stroke, meticulously reproduces the photographic original, adopting all its imperfections. The work is part of a series for which Stingel copied animal portraits from the same calendar—an owl, a woodpecker, and a wild boar, all native to the Alpine landscape—each in the identical square format. The motif of the fox appears familiar and is linked with numerous stories, ranging from its role in mythology and fairy tales to completely subjective associations.

A ghostlike figure with a wide-open mouth, deep eye sockets, and arms flung upward in dismay or fright gazes unexpectedly out of the painting at the viewer. The figure is shrouded in a cloak of white fabric suggesting both presence and absence. This visual motif derives from the image of an old marionette that the artist transposed into a painting. He then spread out the painted canvas on his studio floor to expose it to the most varied influences. The dynamic superimpositions on the picture surface illustrate the element of process within the artistic work and the crossing of boundaries between figuration and abstraction.

The paintings in this room were made in a multilayered process—an artistic method that we encounter time and again in Stingel’s work. In this group of works, the so-called Serapi carpet pattern was applied with oil paint and enamel onto a canvas whose surface had already been covered by different layers of paint. Here, along with the processual aspect, Stingel’s typical approach of working in series also takes on tangible form. Rather than concentrating on the individual work as such, the artist instead produces a whole series of comparable and interrelated pictures dealing with a particular motif. The individual visual motif can reappear in different variations. The Serapi pattern seen here was used not only for this group of paintings but also in several creative phases for the overlapping of photorealistic painted motifs such as portraits and landscapes.

As a model for his landscape painting, Rudolf Stingel often uses found, historical photographs and their material qualities in the painting process. Hence, in this painting of a peak in the South Tyrolean Alps, we notice not only the attention to detail in the rendering itself but also the dust and scratches accumulated on the surface of the original photographic model. Memories and traces take on a central role in the artist’s work, evidence of exploration on the autobiographical plane, as well as of both conscious and unconscious processes. The dynamics between control and chance become themselves the subject of investigation through the medium of painting.

The three luminous, matte gold paintings reveal this creative process in multilayered form, such as in the juxtaposition of light and dark or of occupied and unoccupied areas. Landscapes emerge—entirely specific and at the same time completely abstract—that open up a view of perspectival space.

Hanging on the walls of this encompassing carpet installation (see Text 13) is a colossal portrait of the artist, as melancholic as it is solemn, large and overwhelming like a movie screen. Rudolf Stingel poses as the protagonist of a film. Rather than a self-portrait, it is a meticulously painted reproduction of a photograph by his fellow artist Sam Samore, hence the reference in its title After Sam.

In Untitled, 2018, a magnified flower field extends across three large panels, taking the form of a classical triptych. The gaze wanders over the painted floral landscape with pink roses and peonies, white lilies and daisies, blue chrysanthemums, and red poppies. The rhythm of the painting is based on the photographic representation of a mid-nineteenth century wallpaper.

Artist's book - What can painting be today
Starting with his exploration of classic visual themes, Rudolf Stingel has developed a wealth of motifs. Besides various series of abstract and photo-realist paintings, he makes large-format works out of Styrofoam, paintings cast in metal, and spaces covered in carpeting or acoustic tiles that viewers can touch or walk through. In his first European museum exhibition, the Fondation Beyeler is presenting Stingel’s most important series of works from all phases of his career. The companion catalogue has been conceived as an artist’s book and unfolds the visual variety and diversity of Stingel’s art. Contrasting photographs of individual works and views of exhibitions point out new associations, allowing a completely refreshing perspective of his oeuvre. 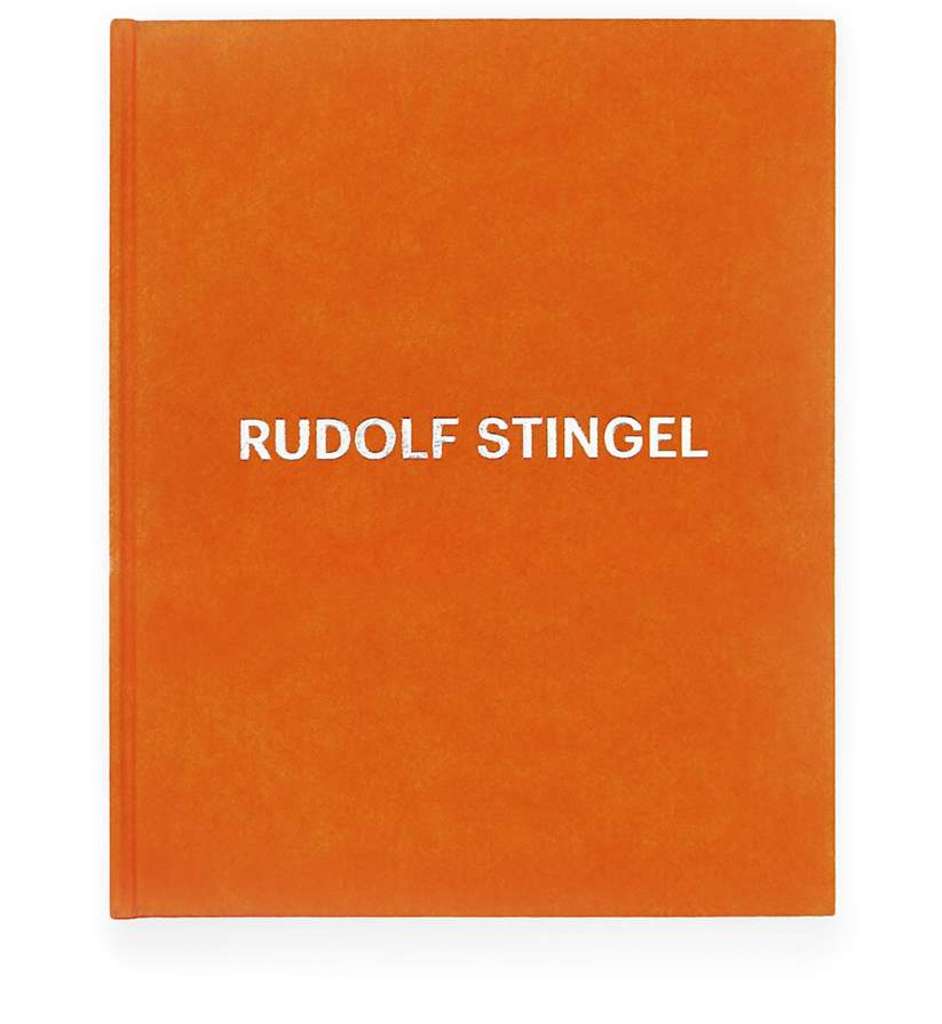 The British musicians and composers create an electronic soundscape, which unfolds by degrees inside the exhibition in relation to Rudolf Stingel’s works. Sound interventions in hall 5 at 1 / 3 / 5 p.m

The exhibition is being supported by: