The Fondation Beyeler will be holding an exhibition that presents the most important paintings of the British painter Peter Doig, who lives and works in Trinidad, London and New York. Doig, who was Born in Edinburgh in 1959 and grew up in Trinidad and Canada, is currently also Professor of Painting at the Kunstakademie in Düsseldorf.

Doig is a versatile artist who masters a wide range of techniques, drawn from both the present and the past. Generally representing people in nameless landscapes–in which motifs from Trinidad or Canada can frequently be recognised– his large-format paintings are often based on private pictorial material or found objects. Their colourfulness, luminosity and enigmatic atmosphere make them fascinating. Doig thereby continues the tradition of great masters such as Gauguin, Bonnard, and Matisse.

In the Romantic sense, Doig’s works convey a sense of yearning in which viewers can lose themselves. His representations of nature, which are often extremely mysterious, are as exotic as they are melancholy and as attractive as they are sinister.
In a method akin to sampling, Doig seeks out fragments from contemporary life and civilisation, and integrates them into his works. He takes photos, newspaper cuttings and pictures drawn from pop culture, like album covers and film posters, and uses them as the starting-point for his paintings. The subject matter and painting techniques of the works he creates therefore offer new visual possibilities while nonetheless subtly seeming familiar to viewers.

The exhibition will present many of Doig’s famous large-format works, which will be mirrored and complemented by an installation on the lower floor. Examples of Doig’s eye-catching and highly innovative graphic works, which show his rich inventiveness, will also be displayed downstairs. His graphic works, too, often provide the starting-point for his paintings.

As a fascinating highlight of the extended presentation, Peter Doig will create a large mural at the Fondation Beyeler (also on the lower floor).

Peter Doig’s pictures of canoes have become icons of contemporary painting. 100 Years Ago (Carrera) shows a man in a canoe on the open sea in front of an island on the horizon. The composition is determined by the flat handling of color and shapes; in a sense this is a new kind of color field painting in the tradition of Henri Matisse and American post-war art. The forceful impact of its large planes is softened by the subtle palette and eased by the modulations in paint texture. The picture thereby acquires a dreamy, elegiac mood that seems infused with melancholy. The loneliness of the individual, lost in time and space, is reinforced by the island motif—we are looking at the prison island of Carrera, off the coast of Trinidad. We might also think of the motif of the Island of the Dead, however, as lent shape in art history above all in the Symbolist pictures by Arnold Böcklin. It is these subjects reminiscent of myth, translated into contemporary painting, that have established Peter Doig’s international fame.

For this painting Peter Doig looked back to photographs. The motif of the Muldentalsperre dam, for example, is taken from an old German postcard. Doig reproduced the dam decorated with colored stones and initially intended to show two gatekeepers in front of it. He then came across a photo taken ten years earlier, at a time when he was working as a dresser at English National Opera. He and a friend had put on some costumes for fun and posed for the camera. Through its combination of the colorful dam and the bizarre figures, the scene takes on the air of a strange, lost world. Bathed in a nocturnal blue, it might be the memory of a dream—an impression strengthened by the areas of swimming, translucent washes of paint.

In a tropical landscape, a man wades along a shore through shallow water—a mixture of colorful, transparent hues. A waterfall of pale blue gushes in the background and flows in thin, trickling streaks out of the picture, as it were. The abrupt shift between abstract marks and motifs generating spatial depth is disorienting and obliges us find our bearings within the picture. We search in vain for the pelican mentioned in the title. The subject refers to a scene that the artist observed on a beach in Trinidad, where he watched a local grappling with a large pelican. He supplemented his memory of the incident with the postcard motif of an Indian fisherman dragging a net behind him. In Pelican (Stag), this recollection of a first-hand experience, the photographic reality of the postcard and the presence of the liquid paint medium are all interwoven and create a multi-layered association of narrative and painting.

An impressive representation of heat and humidity, and at the same time a picture in which time seems to have stood still. The composition enthralls us above all through the virtuoso handling of its colors, which present an endless wealth of exquisite nuances as they flow one into another. The familiar motif of a boating party appears distanced and unreal. Although the deindividualized figures lend the picture a spatial structure, they tell us nothing about the place or time in which it is set. On a pictorial surface within which palms materialize as if out of nowhere, and in which the water merges seamlessly with the sky, the red boat with its intangible passengers hovers on the edge of figuration, between dissolving and reflecting planes of color.

Talking about the origins of this painting, Peter Doig recalls: “I was in Chicago for an exhibition and I saw the Daumier painting,The Print Collector, a painting of someone looking at prints. I was quite drawn to this male figure looking and the expression on his face. There wasn’t much detail; a lot of it had to do with body language. Back in London I made a painting based on the same idea […]. It was a combination of the Daumier painting and a gallery I’d seen in Vienna called Haus der Bilder [“House of Pictures”] that was full of different types of paintings, landscapes, genre scenes, portraits. The Daumier painting reminded me of this shop front in Vienna and provided me with an entry point to this other world. So I tried to piece together my own version. […] Metropolitain (House of Pictures) was a questioning painting. How does one interpret what you do?”

The person at the center of the picture looks like a boy, but is in fact the artist’s brother at the age of about 28. Peter Doig deliberately wanted to avoid a portrait, however; of more importance was the representation of a feeling of loneliness. The small figure seems lost within the large composition, and his downcast gaze reinforces the sense of solitude and of being lost in thought. The melancholy character of the scene is further underlined by the finely nuanced colors applied in a differentiated manner. Doig refers in this context to a painting by Gustave Courbet, whose handling of white particularly impressed him and which was a direct source of inspiration for the palette of this work (the painting in question is Poachers in the Snow of 1867, likewise on display at the Fondation Beyeler until January 18, 2015). Blotter is also based on an LSD trip that the artist experienced at the age of 14 (more about this can be found in the interview conducted with Peter Doig by the curator, reproduced in the exhibition catalogue).

The two works Echo Lake and Swamped are based on movie stills that Peter Doig has translated into paintings. Each makes reference to a closing scene from the 1980 American horror classic Friday the 13th. The artist is not interested in the unexpected shock delivered at this point in the film, but concentrates upon the calm but nonetheless ominous atmosphere. In Swamped, a boat carrying the main female character, apparently safe at last, is floating alone in the morning on a lake. It is a motif to which Doig would later return—albeit in a very different way—in 100 Years Ago (1 •). Here, however, he is still working in an expressionistic style, using intensive colors and condensing forms to their essential character, so that it is almost impossible to recognize anything of the original image.

Echo Lake has likewise been altered and thereby alienated from its source. The layout, for example, is reversed (strictly speaking, the policeman should be standing on the left), indicating that Doig explored the subject first of all in a print and then used this as the starting point for his painting. The artist has also transposed the scene to nighttime (in the film the sky is blue), through which he creates a gloomy, uneasy atmosphere. The policeman’s cry is made to seem helpless and alone; it remains unanswered—a silent scream as so famously pictured by Edvard Munch.

Tour through the «Peter Doig» exhibition with curator Ulf Küster

The works of the British painter Peter Doig (* 1959 in Edinburgh), who divides his time between Trinidad, London, and New York, are densely atmospheric and sometimes uncanny. They are often based on found or private images, which the artist pieces together into dreamlike compositions full of melancholy and angst. Employing an unusual color palette and possessing an immense sensitivity for his medium, Doig creates superb images, following in the footsteps of great masters such as Paul Gauguin, Pierre Bonnard, and Henri Matisse. This publication presents him as an artist with a conceptual practice—as a visual thinker who is not only fascinated by the history of painting but also the painting process itself. The largeformat paintings and works on paper reproduced in the volume allow the viewer to share Doig’s creative passion and his enthusiasm for the power of paint. 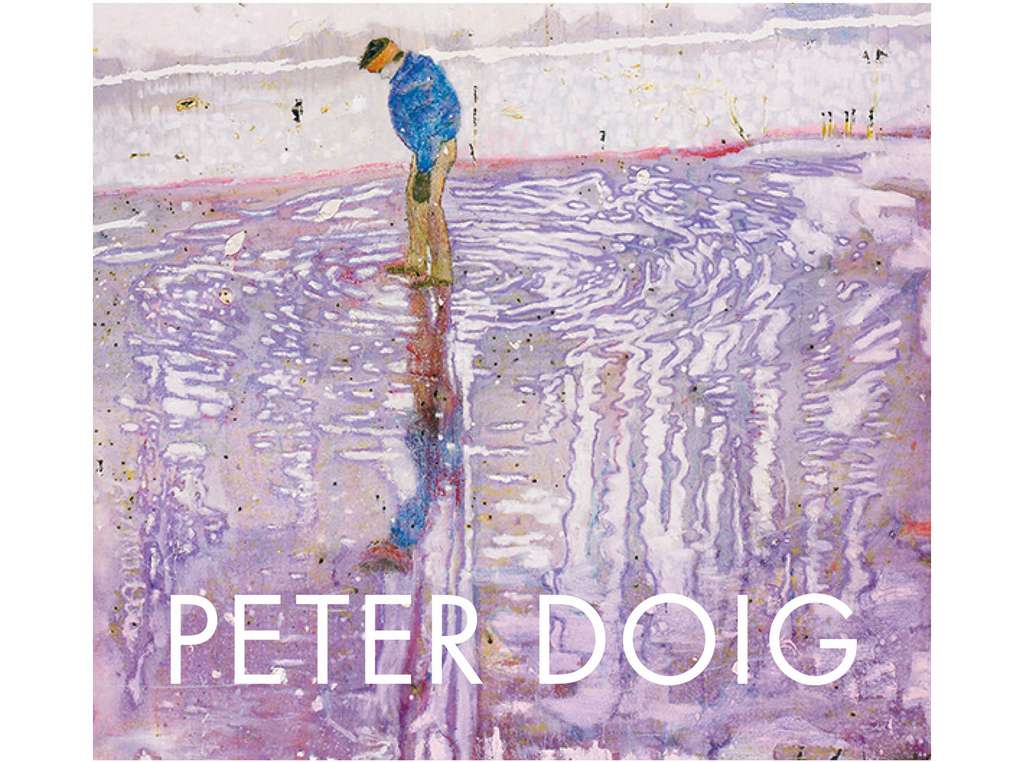 1990 Receives MA from Chelsea College of Art and Design

The exhibition «Peter Doig» is being supported by: