Kazimir Severinovich Malevich (February 23 [O.S. 11] 1879 – May 15, 1935) was a Russian avant-garde artist and art theorist, whose pioneering work and writing had a profound influence on the development of non-objective, or abstract art, in the 20th century. Born in Kyiv to an ethnic Polish family, his concept of Suprematism sought to develop a form of expression that moved as far as possible from the world of natural forms (objectivity) and subject matter in order to access "the supremacy of pure feeling" and spirituality. Malevich is considered to be part of the Ukrainian avant-garde (together with Alexander Archipenko, Vladimir Tatlin, Sonia Delaunay, Aleksandra Ekster, and David Burliuk) that was shaped by Ukrainian-born artists who worked first in Ukraine and later over a geographical span between Europe and America.Early on, Malevich worked in a variety of styles, quickly assimilating the movements of Impressionism, Symbolism and Fauvism, and after visiting Paris in 1912, Cubism. Gradually simplifying his style, he developed an approach with key works consisting of pure geometric forms and their relationships to one another, set against minimal grounds. His Black Square (1915), a black square on white, represented the most radically abstract painting known to have been created so far and drew "an uncrossable line (…) between old art and new art"; Suprematist Composition: White on White (1918), a barely differentiated off-white square superimposed on an off-white ground, would take his ideal of pure abstraction to its logical conclusion. In addition to his paintings, Malevich laid down his theories in writing, such as "From Cubism and Futurism to Suprematism" (1915) and The Non-Objective World: The Manifesto of Suprematism (1926).Malevich's trajectory in many ways mirrored the tumult of the decades surrounding the October Revolution (O.S.) in 1917. In its immediate aftermath, vanguard movements such as Suprematism and Vladimir Tatlin's Constructivism were encouraged by Trotskyite factions in the government. Malevich held several prominent teaching positions and received a solo show at the Sixteenth State Exhibition in Moscow in 1919. His recognition spread to the West with solo exhibitions in Warsaw and Berlin in 1927. From 1928 to 1930 he taught at the Kyiv Art Institute, with Alexander Bogomazov, Victor Palmov, Vladimir Tatlin and published his articles in a Kharkiv magazine Nova Generatsia (New Generation). But the start of repression in Ukraine against the intelligentsia forced Malevich return to modern-day Saint Petersburg. From the beginning of the 1930s, modern art was falling out of favor with the new government of Joseph Stalin. Malevich soon lost his teaching position, artworks and manuscripts were confiscated, and he was banned from making art. In 1930, he was imprisoned for two months due to suspicions raised by his trip to Poland and Germany. Forced to abandon abstraction, he painted in a representational style in the years before his death from cancer in 1935, at the age of 56.

Nonetheless, his art and his writing influenced contemporaries such as El Lissitzky, Lyubov Popova and Alexander Rodchenko, as well as generations of later abstract artists, such as Ad Reinhardt and the Minimalists. He was celebrated posthumously in major exhibits at the Museum of Modern Art (1936), the Guggenheim Museum (1973) and the Stedelijk Museum in Amsterdam (1989), which has a large collection of his work. In the 1990s, the ownership claims of museums to many Malevich works began to be disputed by his heirs. 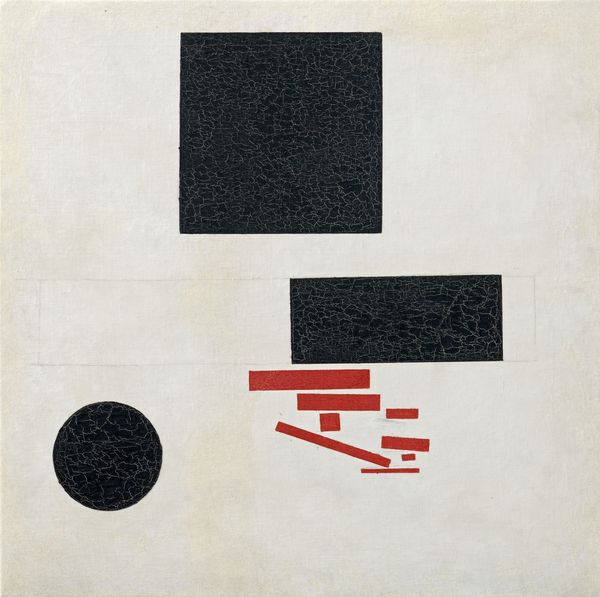