"For it doesn’t matter whether it’s shooting a film, painting an image, or simply casting a glance at someone: pornography always lies in the eye of the beholder."
Anja Römisch 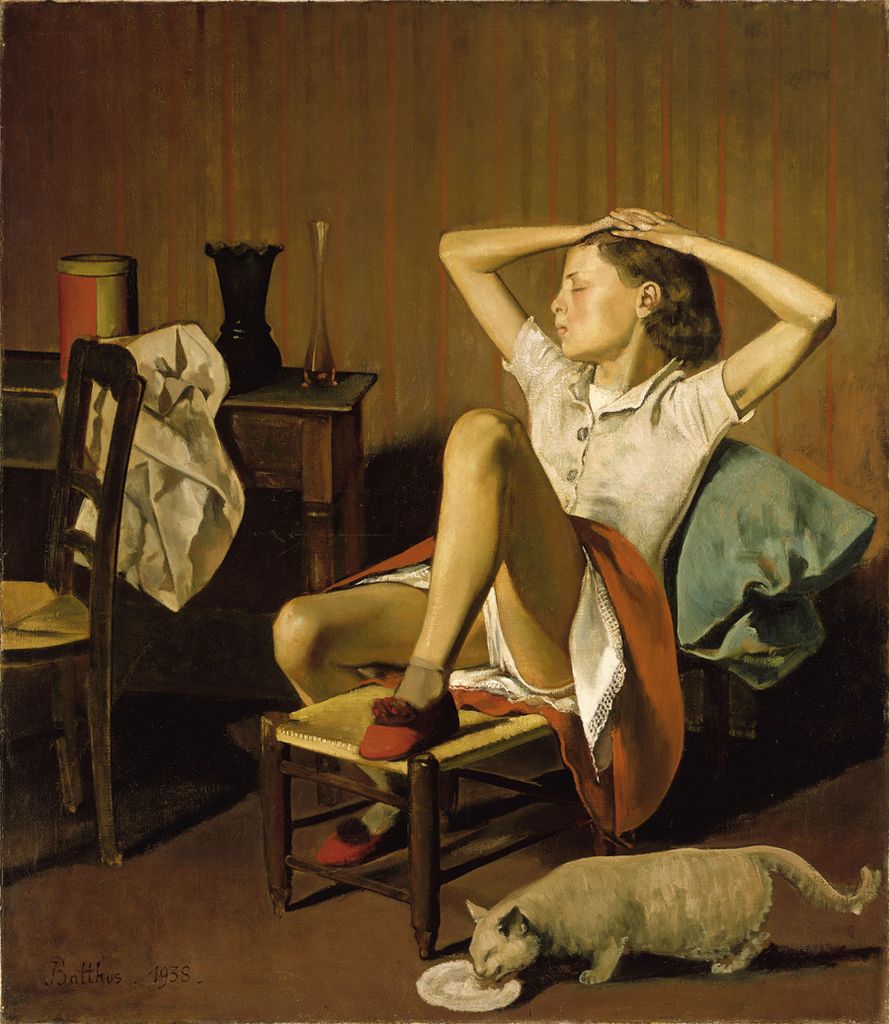 It is no use excavating the grave in the cemetery of Rossiniere and digging through soil and rot with your bare hands. It is no use prying open Balthus’ coffin. You might be able to find a few bones, but the brain will have decomposed, and however far science may yet advance, the remains of his synapses will at best turn up in the stomachs of a few worms that have not yet died themselves—or, come to think of it, even that won’t happen, since worms, too, excrete in some fashion or another, and to whatever extent memoirs and images stimulate speculation, the most tangible thing that will have remained, then, from the intentions and desires of the artist is, precisely, worm excrement. In short, I find it irrelevant to focus on the possible intentions and desires of someone who has passed away. There are already enough people who are provoked by the gunk produced by irate citizens. Asking why Balthus’ works still cause a stir and how we deal with the resulting uproar (in the curation of exhibitions as well) is far more interesting.

I believe that what is most disturbing in Balthus’ paintings is not what they represent, at least not as such, but rather the presence of what they represent in our own time. When Thérèse’s panties show under her skirt, the viewer inevitably finds himself in the position of a voyeur. He is drawn to the composition of colors, the atmosphere they create, and the angle described by Thérèse’s thigh and the stool. He finds himself captivated by what is thus exposed (seemingly as the result of a comfortable seating position). And he realizes that he should not feel attracted to it.

Recently, I was sitting on a balcony with a female friend of mine. She told me about her new job in a bar—and that a customer had given her his business card, telling her, “I know how little you’re making in this place, and I’d pay you more.” “I’m not really good at this,” she replied, “why would you want to hire me?” “You’re a girl, and you have breasts”, he answered. This customer’s response reminds me of something that occurred at my own workplace a little while ago. After I had sat down on a wet chair, the imprint showed on my clothes where they covered a certain body part (otherwise known as my butt). In moments like these, jokes by co-workers are indispensable. When, however, one person commented, “you may as well take off your pants, since my imagination is running wild,” and then told me, “my hands are nice and warm, I can pat you dry,” these remarks no longer qualified as light-hearted fun. And since I don’t want to turn this into a debate about sexism in the workplace, let me just say this: when I put on a top with a plunging neckline or wear high heels, I don’t mean to start a personal collection of nasty pick-up lines or provoke a cacophony of car horns. From time to time, I wear something hot in order to feel hot, and I feel that way not because some random lechers stare at me, but because I notice myself in the reflective windows of a passing tram, I’m aware that “I am here,” and I can hear myself when my heels give a concert of clicks and clacks. I feel hot, in short, for a variety of reasons that I don’t always need to define, but certainly are justified.

Even though there is, at the moment, a lively debate about sexism, men continue to act in a sexist way as though it were the most natural thing in the world. The matter-of-factness of these behaviors in the face of ongoing debate makes it all the more difficult to put up with the usual come-ons, whistles, and honking car horns. You know very well that you make us uncomfortable. You know that this kind of behavior bothers us. Nevertheless, you continue to act this way in the most naïve manner possible. Thank you, Balthus, for robbing the viewer of this kind of naïveté, even if this was not your intention. Thank you for the discomfort that your paintings are causing. For it doesn’t matter whether it’s shooting a film, painting an image, or simply casting a glance at someone: pornography always lies in the eye of the beholder.

Incidentally, there are pictures by Balthus that cause me much greater unease than the painting of young Thérèse. No doubt, she is young. But do we not frequently catch men gaping at thirteen-year-olds in hot pants, apparently seeing only the thighs, not the age? Indeed, the image of Thérèse makes me think primarily of the most appalling sort of voyeurism. The uneasy associations provoked by other works of his relate to much darker phenomena in our world. Unfortunately, these kinds of paintings are not shown in the exhibition at Fondation Beyeler. “Miró et sa fille Dolores,” “La leçon de guitare,” and “La victime,” for example. Depict hands taking advantage of the familiarity of fatherliness; the labia of a resigned girl plucked as though they were the strings of a guitar; and a woman killed by a perpetrator. We should not try to avoid these themes by hiding behind accusations against Balthus. We must face these subjects—or rather, the unease they produce—and confront ourselves in them.

Let us drop, then, the excavation of the grave, the gunk, and the speculations about the desires of a deceased artist. The living are causing enough problems. Balthus is able to make these problems visible and take away the neutrality and self-distancing that let us accept facts as something that cannot be changed. He is able to produce unease, with compositions of color and light and the shamelessness with which he shows us things. Thank you, Balthus. Thank you for capturing, in your pictures, vapidness and dread. For we need to feel dread and allow ourselves to really experience it. It is the only way to grasp the world.